6 Naughtiest Cities To Travel To In Europe 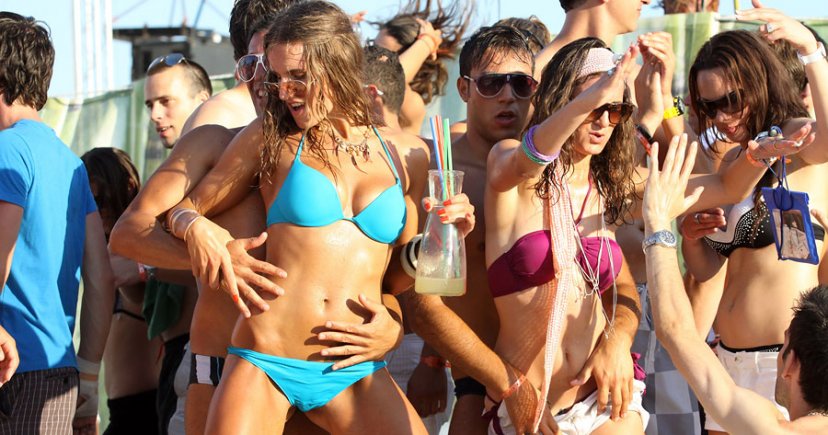 Many icons of history and culture come to mind when planning a trip to Europe — the Eiffel Tower in Paris, Tower of London, Colosseum in Rome, and Neuschwanstein Castle in Germany. These places, among many others, make for a fantastic trip. Then again, sometimes you can only see so many gorgeous cathedral interiors, take so many walking tours, and gaze at so many titular works of museum art before you need to shake it up…or just shake it. Europe is home to some of the naughtiest spots perfect for making legendary memories. We’re not just talking red light districts, but rather the indulgences to drink a little, dance a lot, and do things you wouldn’t do at home. Forget the ‘sin city’ Las Vegas and (responsibly) take the party to these crazy places:

Prague’s nightlife isn’t anything to write home about. The nightclubs are mediocre at best, but the local bars with cheap Czech Budvar and the smattering of jazz clubs are where it’s at. However, if you’re looking to invite some novelty into your travels, consider absinthe on the alcohol shop shelves. It seems to appear everywhere you turn — there are bottles in every shape and size containing the green elixir. Prague has a history of alchemy, but the potion comprised of aniseed, fennel and wormwood is one that can cast a spell on the night. After acquiring a bottle of absinthe or a glass at the bar, remember to drink responsibly. Absinthe is one of the highest-proof spirits (usually bottled at or above 70% ABV), but don’t expect to hallucinate as the common myth often perpetuates. It would take dangerous amounts of consumption of absinthe to be affected chemically by the psychoactive byproduct of wormwood, thujone. After sipping perhaps take a walk about the Old City or relax into a worthy discussion with pals about artists like Van Gogh, Hemingway, and Wilde who were fans of the liquor as well.

5. Dublin, Ireland
Of course, you’re going to put back a pint (or three) at the pubs in Dublin, but after an afternoon of beer and sightseeing, you’ll want to rest up before rallying and hitting the dance floors (often found at the basement level). Techno and creativity have emerged with the underground club scene that’s blossomed over the previous half-decade. These underground clubs open during the wee hours of the morning (around 3 a.m.), right around the time most bars close across the rest of the city. For insights into this culture (yes, there are drugs, but it’s not the focus) read this guide on where to find the party.

4. Zrce, Croatia
Type in Zrće into your search engine, and you’ll see the long pebble beach neighbouring the Adriatic Sea on the island of Pag billed as the “top party beach in the world.” While this may just be uptalk marketing, Zrće has certainly made a reputation for itself as a summer hotspot for clubbing. Consider it the Ibiza equivalent of Croatia. DJs spin the beat of the season as swimsuit-clad beachgoers tan, shimmy, drink, and dive into the non-stop party-sphere. Music festivals like Hideout, Fresh Island Festival, and Sonus assure a packed but exciting environment to experience the island!

3. Soho, London
Known as London’s “naughty district”, SoHo marries mixology and cocktail couture bars with sex shops and venues for lust. Back in 1984, there were almost 200 sex establishments in the approximate square mile district. Now, only a few secret spots remain to harken back to its longtime lusty history which includes the 1719-established The Hellfire Club. Plan for a long night out of losing yourself in the passions of the city at spots like the premium gay club, The Shadow Lounge or hit up the old-school glam Rah-Rah Room for a cabaret.

2. Berin, Germany
It was only in 1989 that the Berlin Wall fell to usher in a new period shared culture, economy, and relationships with Germans on the west side of the wall. But, even before the Cold War, Berlin could be christened one of the founding capitals of LGBT rights; the Scientific-Humanitarian Committee was founded in 1897 and campaigned for legal reform regarding homosexuality in Germany. Following WWI, sex and art enjoyed little to no censorship in the democracy, making Berlin the liberated sex capital of the continent. Unfortunately, the Nazis denounced and took actions against homosexuals in Berlin (and elsewhere), driving the culture into hiding.

Harkening back to its roots in nudity and general debauchery, Berlin has made a sexy comeback since its communist days. Gay clubs are famous as are the all-night techno clubs like the Friday through Monday morning party at Berghain in an old industrial warehouse. (A phrase you may hear from a bouncer: “In einer Reihe installed!” or “Form one line!”) The Schöneberg district is known as a quintessential gay area complete with clubs like the foam-party-hosting Apollo Splash Club and darkroom-boasting Connection Club Berlin. If you’re looking for something outside of the gay scene, Berlin has something to offer everyone from burlesque to the eclectic maze of dance floors at Sisyphos. Don’t know where to start? Take the “Naughty Segway Tour” around the city and learn all the top spots to hit when night falls.

1. Amsterdam, Netherlands
For the casual marijuana user, Amsterdam is a sort of like heaven. Travellers 18 and older can buy weed (just like the locals) at “coffee shops” (not at every cafe though) around the city. A menu will advertise a couple of varieties — blond and black — and you can expect a joint from a coffee shop to include tobacco in the roll. (Remember, these coffee shops also sell more traditional cafe fare, so sip on an espresso or hot chocolate as you settle in.) In Amsterdam, you can even smoke on the outdoor patio (in front of the police!) and not run into any trouble. In fact, you can smoke most anywhere outdoors in Amsterdam, but it is illegalto smoke within a certain distance of children’s playgrounds or school grounds.

Indulging in some “vices” while travelling can be precisely the escape and the experience you needed. However, it’s always good to remember that when travelling around the world you’re a guest in that host country. Just like at home there are consequences for actions that are illegal or harmful to people or property. Getting drunk in a foreign country does not grant your the passport stamp for stupidity. Have fun, but make smart choices in regards to personal safety; avoid situations that could be dangerous.